It feels like all my life I’d been inhaling. Inhaling the poison, the toxic fumes coming out from the factories of their mind; and it feels like this is the first exhale of my life. There were only two ways: One way was to stuff myself up with it until I can’t take it anymore and blow up and the second way was to exhale – To let it go.

Remember the time when owning a cordless was the coolest thing ever? Cricket had just become a national craze and Imran Khan a living legend; Atari and Nintendo were the next coolest thing to a Ferrari – not to mention shooting a duck with an actual gun on your Nintendo. How about playing Dave 1 on your brand new Windows 95 and finding out you could not cross level three no matter what? Or perhaps the time when you’d rent out movies on VHS because owning them was practically impossible? Or the time when you were suddenly informed that the letter ‘Z’ was no longer pronounced as ‘zedd’ but had been changed in to ‘zee’? Yes I’m talking about the 90′s!

The 90′s have come and gone, but this decade is still “da bomb”—from fashion trends to our favorite TV shows, these years are full of awesomeness.  Let’s travel back to…

Oh, this tension between our reality and dreams,The where we are and the where we want to be.The home we know and the home we desire,The warmth of flame without the burn of fire.The devoted love of another without pain,The fear of moving on when we have everything to gain.

more sketches and poetry by me at facebook.com/areeshasmusings

(This isn’t complete yet. This is my first attempt at writing in Urdu.) 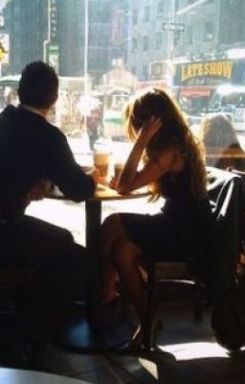 I was on my way to college when I saw that coffee shop again. Everyday, I walked through the same street, ignoring that coffee shop because it reminded me of the little piece of heaven I shared with him. But today was one of those days when you just want to give your past self another chance. You want to feel what you used to, one last time. So I entered and sat on the corner most table. Our table. I looked for The Fault In Our Stars by John Green in my bag. Our Book. My eyes on its most precious word: “Okay.”
Wait, what’s that? I turned my IPod’s volume louder. Headphones on, of course. Tonight by Fm Static was playing. Our Song. Coincidence? I was in tears. I remember the last thing he said to me, “You’re a girl. You can cry. I can’t even do that.” Perks of being a girl? I wanted him to ask “Okay?” like he always did and today, for the first time, reply, “Not Okay.”
Someone dragged a chair towards my table. First thing I noticed were his hands. They looked familiar. It was him. My heartbeat faster than ever. Butterflies in my stomach turning into bats. His face, expressionless. “Hi.” Oh so you wanna keep it casual? “Hey.” I said, concealing my feelings mixed with nervousness and excitement. No response. Are you fucking kidding me? “What’s up?” I asked because he was too cool to do that? “Moved to Dublin. Gonna work until college starts.” He smiled. Charming asshole. He had a lot of problems with getting into a good college and always stayed stressed out about that. “Ohh. See, everything works out one way or the other.” I smiled bright. “Except for us.” He responded like he already knew what I was going to say…

Here’s to the ones who write lyrics in the library,
To the ones who are just not ordinary.
To the artists, the writers,
the rebels, the fighters.
They’ll say you’re not good enough or you’re not what they’re looking for.
They’ll tell you what you do is worthless or they’ll say, “Dream on, kid!”
“DREAM ON, KID!”
So dream on, kid.
Yes, dream on. Stay hungry, Stay creative.
Don’t settle for anything less because you are the ones who turn their black & white world to colorful.
You are the ones who give them something to chew on. You give them hope.
You are a rhythm, the colors, the shapes, the imagination.
They are a copy of a copy of a copy.
But you are original. You are an innovation, an inspiration, a sensation. You are all an idea.
And ideas don’t die.
So next time they tell you to dream on..
YOU. DREAM. ON.

You know who’s given me that beautiful life?/ A new reason to stay alive, stay passionate and happy? My best friend.
The word “Best Friend” is so overused that it has lost its real meaning. But not for us. Call him my best friend or call him my boyfriend, it doesn’t really matter because he’s played all those roles. He’s quiet and doesn’t know what to say most of the time but his actions spoke to me. And that’s much better than all those people out there who just know what to “say” and not what to “do.”
He would never tell me what’s wrong with him. Never ever. But would always stay concerned about what’s going on with me. Jeez, I mean..are you some kind of angel?
We don’t even know what’s it called, the thing that we have..but whatever it is, a mixture of true friendship and love..the best experience one could ever have. I may have a thousands of crushes but in the end it’s only him whom I love.
I know it’s nothing..
I know we are nothing.
I know that there’s really….nothing.
But I just want to say that all of these nothings have meant more to me than so many “Somethings.”

“Even the best fall down sometimes,
Even the wrong words seem to rhyme.
Out of the doubt that crossed my mind,
I somehow find you and I…collide.”
Everything about him is so fucking beautiful. Happy Birthday to him, again.

(Please listen to this: https://soundcloud.com/apyarmy/06-heres-to-you-not-the-middle)